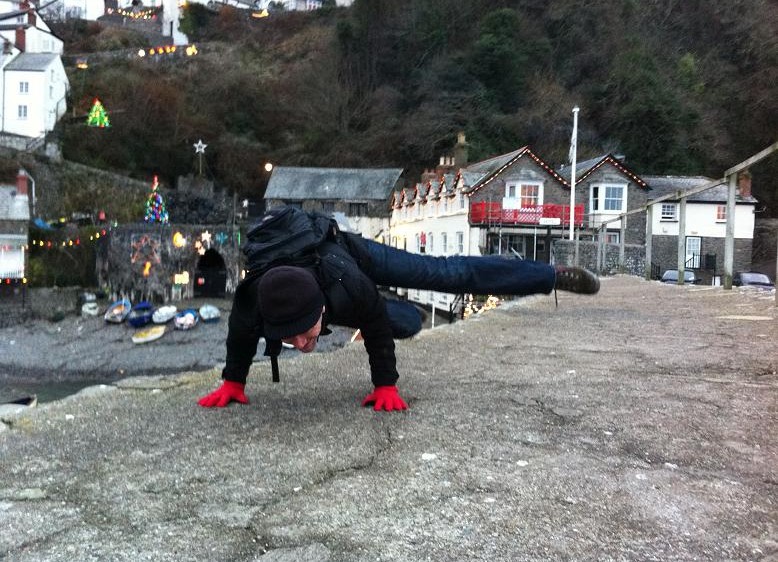 I got an email recently from a man who said, “I’m 42, normal weight, rigidly inflexible, active, have daily nagging back pain/sciatica and would like to start yoga. How would you go about picking a place/class? There seem to be many advertised in various locales. Is there much you can tell short of just attending a class?”

Excellent question. It’s important to begin your yoga career in a way that doesn’t leave you feeling confused, out-of-shape, and old. The biggest mistake that yoga newbies make, particularly guys, is to push themselves too hard. I know lots of people who’ve mistakenly started with a hard Power Yoga class, or something in the “hot yoga” genre, because they think that yoga is about exercise and that they need to sweat extensively in order to get results. That path can work if you’re 22 years old and still actually look forward to getting out of bed in the morning. But if you’re a middle-aged dude who has back pain and is “rigidly inflexible,” it’s a recipe for unhappiness.

There are dozens of types of yoga offered in the U.S., in all different kinds of venues, but I would recommend at first avoiding genre-specific yoga like Ashtanga, Iyengar, Bikram, Anusara, or kundalini. All of those are wonderful disciplines worth practicing later, but they have their own modus operandi and sets of arcane rules that may not always apply to other classes and could lead to confusion. The best thing to do is to find a studio that offers a beginner’s series or an “Introduction To Yoga” workshop. These appear pretty often, are generally quite reasonably priced, and usually happen at night or on the weekends, in a series of three or four.

If you can’t find a beginner’s series, then look for a “gentle flow” class, or something labeled Level One, which translates, in modern yoga terms, to “pretty easy.” An increasing number of studios also offer classes aimed at “Stiff White Guys.” Though I find that phrase extremely annoying, mostly because I am one, you might discover that some such thing suits your needs.

So here’s what you need for your first class: A sticky mat, though most studios have mats to borrow for free or rent for a dollar; a towel if you tend to sweat a lot; maybe a bottle of water; and, most importantly, an open mind. Don’t feel self-conscious about being one of the only men in the room, which is likely. Everyone will either be nice and helpful or so focused on their own practices that they’ll ignore you.

You don’t have to be shy. Take a spot in the middle or near the front so the teacher can keep a careful eye. Tell him or her that you’re new to yoga. People giving introductory courses tend to have a lot of experience, so expect that they’ll break down simple core yoga postures in easy-to-understand terms and will probably also throw in some meditation and easy yoga philosophy. You’ll get a good grounding in the practice that can take you wherever you want to go next.

Remember that if a teacher isn’t sympathetic to your particular needs, you don’t have to stick with them. Yoga is fluid, in practice and definition, and you can do with it whatever you please. Eventually, you’ll settle into a routine and find a teacher you like, in some style of yoga or another. It almost always happens. This makes a yoga practice challenging to begin, but once you get the yoga bug, it’s almost impossible to stop.

Neal Pollack is the author of the memoir Stretch: The Unlikely Making Of A Yoga Dude, as well as several other books. His most recent work is a self-published novel called Jewball. He lives in Austin, Texas, with his wife and son. You can find out more about him at nealpollack.com.

I hope you enjoyed this content. If you think any of your friends would also like to read it, please share it with them, using any of the following links:

Softness triuphs over hardness.
What is more malleable is always superior over that which is immovable. This is the principle of controlling things by going along with them, of mastery through adaptation.

Keep in touch with Breathing Yoga

Please connect with Breathing Yoga on any of our channels below, to stay informed of everything we are doing.